WASHINGTON – Police have identified a person of interest connected to a shooting that left four people injured near a school in Northwest DC.

Officials announced they are searching for 23-year-old Raymond Spencer of Fairfax, Virginia.

DC police said they received a call about a shooting at about 3:30 pm on Friday along the 2900 block of Van Ness Street, NW near Edmund Burke School.

There have been at least four victims located, including two women, one man a 12-year-old girl, according to authorities. All the victims are in stable condition and expected to survive, police said.

Metropolitan Police provide cover for residents as they are evacuated away from a shooting scene on Van Ness Street Northwest on April 22, 2022 in Washington, DC. (Photo by Kevin Dietsch / Getty Images)

Police are currently conducting sweeps in the area and are urging residents in the Cleveland Park and Van Ness area to shelter in place. Police say they do not have a suspect in custody. 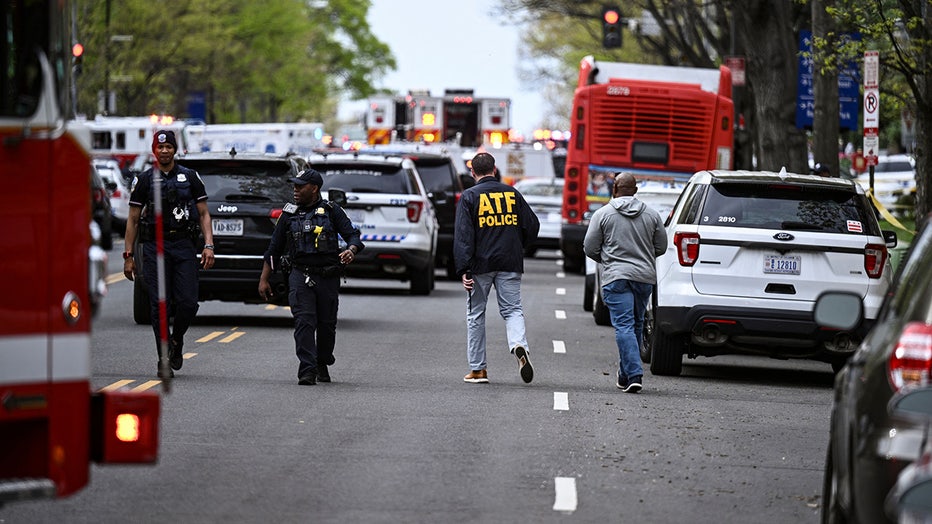 Local and federal law enforcement respond to an alleged shooting near the 2900 block of Van Ness Street in Northwest, Washington, DC on April 22, 2022. (Photo by BRENDAN SMIALOWSKI / AFP via Getty Images)

FOX 5’s cameras captured someone being led away from the scene in handcuffs, but the police chief later said they were detaining people fleeing the scene to make sure they weren’t the shooter.

Videos from the scene show a massive police presence surrounding the area along Connecticut Avenue. FOX 5 crews captured video of officers in tactical gear, armed with long guns who were escorting people out of the area.

FOX 5 DC spoke with witnesses at the scene who said they heard at least 100 gunshots in the area. One witness told FOX 5 she heard four separate incidents or rounds of gunfire take place.

The Bureau of Alcohol, Tobacco, Firearms and Explosives said they were also responding to the shooting to help local authorities.

Police secure an area around the Connecticut Avenue during a reported shooting in Northwest, Washington, DC on April 22, 2022. (Photo by BRENDAN SMIALOWSKI / AFP via Getty Images)

The shooting took place near several embassies in the Van Ness area, including embassies for China, Pakistan, Israel, Nigeria and Singapore. The US Secret Service said their officers were assisting local police and said there was “no impact to Secret Service protectees.”

The University of DC announced that their Van Ness campus is on lockdown in response to the shooting. The Sidwell Friends School in Northwest DC also announced it is on lockdown.

DC police said a family reunification site has been set up at the Cleveland Park Library located at 3310 Connecticut Ave, NW.

They asked anyone who is searching for family members to go to the location and speak with officials about how to locate them.

FOX 5 DC crews are at the scene and we will continue to bring you updates as they become available.